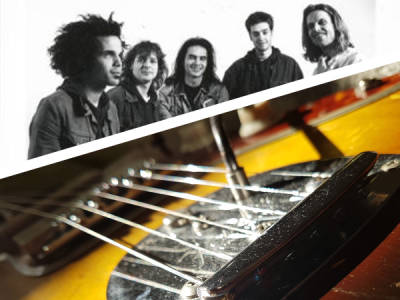 Recently I had the pleasure to have a vintage 1965 Fender Jazzmaster on my workbench! I performed a thorough setup and took a careful look under the hood to verify the originality and age of all parts. As always I loved doing this kind of work so I decided to write about it over here.

I have been intrigued by the Jazzmaster model for quite a while. When I was seventeen years old during the early nineties I was avidly playing electric guitar and was getting acquainted with stompboxes like overdrive, reverb and delay. I loved watching bands play live in and around my (then current) hometown Hengelo (O) and from time to time went to gigs by unknown to me artists on a whim, just to try and surprise myself.

At one of these on-a-whim gigs I turned up at a show by a Dutch band from Eindhoven called Alabama Kids. The general sound of this band was very impressive with huge sounding drums and bass and three guitar players with a Les Paul, a Fender Mustang and a … Jazzmaster, played by Rob Geerings. He created huge waves of distorted, partly chaotic but yet very tuneful noise but easily slipped into great-sounding clean fills as well. He used the vibrato and behind-the-bridge playing to create weird and slightly off-tune sounds, reminiscing a rusty machine or a vinyl record with an off-centre hole. Unfortunately the Alabama Kids disbanded shortly after 1993 but I managed to catch them play a few more times and they made an existing impression on me. If you’d like to hear them listen to Nod.

Fast Forward to present times: I’ve been playing my Jazzmaster for ages and I have adjusted, upgraded and sold many of them from the bench, new, old and vintage. The 1965 guitar I was recently working on reminded me of a few things. First of all: getting the break angle correct is very important with Jazzmasters. This angle has a particular influence on how well the vibrato system operates, as it determines how high the bridge sits above the body and therefore how much pressure the strings exert on the saddles. Partly because these days we prefer to use considerably thinner gauge strings than the for the late ‘50s common .012” flat wound string sets, increasing the break angle is a sensible choice. A neater solution to do this than adding the usual cardboard strips, picks and whatever people used to stuff into the neck pocket, TMA now offers ready-made precision-routed maple shims made by StewMac.

After opening up the ’65 I also discovered that the two potentiometers in the lead-circuit had been replaced with 250k instead of the original spec 1MEG value. This dampens the typical Jazzmaster high-end response quite a bit which I would not be my preferred choice. On the other hand the current owner loves the sound and response. I only realised this is yet another reminder that sometimes only changing two potentiometers can be sufficient to adapt tone and response to the preferences of the owner/player, without having to resort to more intrusive modifications like changing pickups.

Martijn Vink is TMA’s Product Manager Guitar SPA (Strings, Parts and Accessories). He has more than a decade of experience behind the workbench, performing setups and repairs on guitars and basses and communicating with his customers to get the best performance from their instruments. He managed a Dutch guitar store for several years and purchased, restored and traded vintage instruments worldwide. He enjoys playing lead guitar for The Maureens.