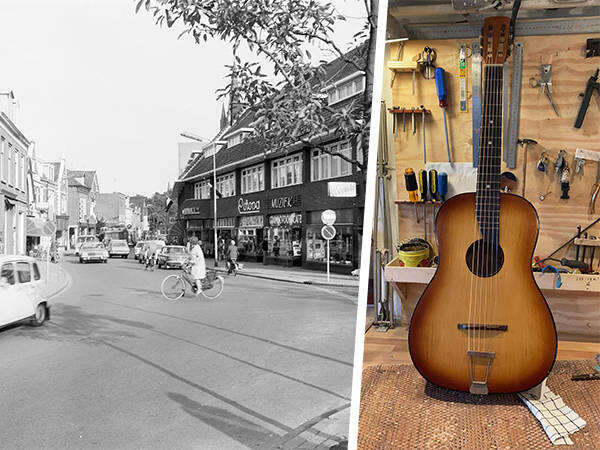 I hope you all had nice and relaxing holidays. I enjoyed myself during a short summer break but couldn’t resist to work on some of my own guitars anyway. I even was able to have a nice vintage late ‘50s guitar with a beautiful flamed maple body restored to a great playable condition!

If only it was a vintage Gibson Les Paul, that’s of course way out of my price range. This was a guitar that belonged to a friend of mine. His mother got it for her birthday in 1959 as her first guitar. It was purchased at a music store in Hilversum and it stayed in the family since then. But time took its toll: by now several frets were missing, the finish was dulled, dirty and sticky and it was fairly hard to play because of the high action. To cut a long story short: I took the guitar in custody, with the promise to the owner to eventually improve it up to a nicer playing standard.

To start with this job I cleaned up the vintage nitrocellulose finish, using only a great polishing cloth, some water vapor and a lot of time and patience. Not only was I able to eventually remove the sticky residue but the colours also came back to life nicely. I considered doing a partial refret myself but the remaining fretwork was pretty sub-standard as well. I liked the way it looked and the characteristic old-fashioned, somewhat nasal sound so I decided to get some more help from a true expert.

I brought the guitar to a great luthier who’s also a former colleague of mine. He sanded the flat fretboard into a 16”radius, finished it and placed new frets. He also made a rosewood bridge from scratch to accommodate a somewhat lower action and offer better intonation. I still wasn’t exactly sure what the actual brand/manufacturer of this guitar was, as I was unable to decipher the faded brand stamp visible through the soundhole. I assumed it was a locally produced Egmond (aka. Rosetti) instrument, but we found out it was a Czech-built ‘Lignatone’ branded guitar.

All in all I am very happy with the result of our efforts. With a much better playability and intonation it’s great to enjoy its characteristic sound. The (completely dried out) ladder-braced maple body, floating bridge, short scale length and small body result in a very different sounding guitar compared to conventional steel-string acoustics. As pleased as I am the overall quality and price of starter guitars has improved immensely over the past few decades, it’s just as valuable to bring an older starter- or low-budget instrument back to life, even while it has no significant collectors value.

To end my column for this month I’d like to share something related to both this guitar and my beloved Gibson J45 acoustic, and that’s how great Martin Retro strings sound on them! These ‘Monel’-wound strings (65% nickel/30% copper) sound very different from customary (phosphor-) bronze sets. They appear to have slightly less overall volume and a less pronounced pick attack but the mid-range is very nuanced and responds impressively on picking dynamics. I also like the elastic playing feel. Of course, it’s all about finding your own favourite set and I presume many players might not like these much for loud flatpicking on Martin-style dreadnoughts. But if you are into a warmer sound, finger- and hybrid picking and/or mahogany-bodied smaller body guitars I recommend to try them out, you might be surprised!

Martijn Vink is TMA’s Product Manager Guitar SPA (Strings, Parts and Accessories). He has more than a decade of experience behind the workbench, performing setups and repairs on guitars and basses and communicating with his customers to get the best performance from their instruments. He managed a Dutch guitar store for several years and purchased, restored and traded vintage instruments worldwide. He enjoys playing lead guitar for The Maureens.